[Note: this post was written prior to the GAPJC decisions being announced].

Life is getting crazy in the Presbyterian Church USA. Today the Permanent Judicial Commission of the General Assembly is supposed to announce an important decision interpreting 10-A, the Constitutional Amendment that stripped the fidelity and chastity clause from our Constitution. Sometimes life in the PCUSA feels like a bad marriage, one where the way forward seems like a single bedroom with two beds.

I read this quote recently from a minister in our denomination who is concerned about the possibility of a new reformed body forming from the meeting of the Fellowship later this month in Minneapolis.

My appeal to those going to the Fellowship PC(USA) event is that if you do seek to create a “new Reformed body” (while still remaining in the PC(USA)) that you honor the intention stated on your website to do so in a manner that is a “mutually helpful association with the PC(USA) and its related institutions.”  If your intentions are to remain as part of the PC(USA) then you must also affirm that those of us outside the Fellowship are also faithful, Biblical Christians who are just as committed to theological orthodoxy and following God as you are.It’s fine if you think that we have erred in our judgment, but it is not “mutually helpful” to impune our motives or our faith.

More on the Minneapolis meeting here. I’ll be attending and blogging about the meeting here at Two Tasks. [BTW – Thanks to Dave Collins for the graphic] 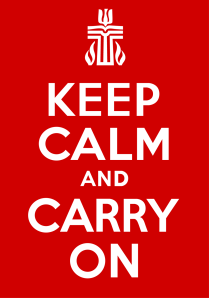 I think I understand what Shawn is trying to get at and I mostly agree with him. If those of us whose faith is more evangelical remain a part of the Presbyterian Church USA it is important that we do so in a way that is marked by integrity in expressing our theological identity and convictions as well as by generosity in interacting with those who disagree with us. Jim Singleton remarked earlier this summer that one of the things that distinguishes the Fellowship from other groups within the PCUSA that express an evangelical theology (PfR, etc) is that its stated agenda is not to reform or change the PCUSA. Rather it is to live and minister authentically as evangelical Christians. That’s it.

I do, however, take issue with this statement: “If your intentions are to remain as part of the PC(USA) then you must also affirm that those of us outside the Fellowship are also faithful, Biblical Christians who are just as committed to theological orthodoxy and following God as you are. It’s fine if you think that we have erred in our judgment, but it is not “mutually helpful” to impune our motives or our faith.”

I think this is partially true, but is mistaken in at least one important way. Here’s where Shawn is (in my view) correct:

Here’s where I think Shawn is mistaken:
The on-going division and debates in our denomination have resulted in the marginalization of theology. The ways in which we talk about “mutual forbearance” in matters of theological belief can tend to suggest that there is next to no connection between what we believe about God, ourselves, and the world and the living of our lives. I should hope that no one really believe this, certainly not Teaching Elders from either side of the metaphorical aisle.
I don’t think there’s anything wrong with believing and stating that those with whom we disagree on this issue (in either direction) are in serious error and that the error they’re committing will have serious repercussions both in the lives of individuals in the church and in our life together. This is in no way the same as saying things like: “they’re jerks,” they’re bigots,” “they’re apostate,” etc. I have hear more than one reference to those who opposed 10-A as being bigots so let’s not pretend that it’s simply the evangelicals who impugn motives and faith.
The way forward in our denomination isn’t going to be found by glossing over difficult issues. It isn’t going to be found in using polity maneuvers to enforce organic unity. It’s going to be found in recognizing that some pretty serious and fundamental differences of conscience exist that mean that new options for ordering our shared life will need to be considered.
Hopefully, at the end of the day we can remain together in a way that is honest about our differences, respectful in our conversation, and united in pursuing the Great Ends of the Church.