Editorial note: I experienced technical problems when this post went live on May 3, 2012. As a result, part of the original post was lost. I have recreated it to the best of my recollection. Sorry for the inconvenience. -Jeff 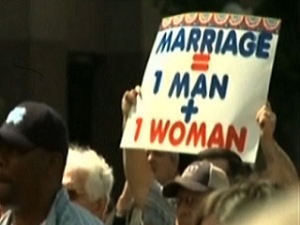 This post is part three of a four part series on the issue of gay marriage prompted by the upcoming vote here in North Carolina on a constitutional amendment intending to define marriage as between a man and a woman. For my introductory post go here and for my post outlining a possible argument in favor of the state recognizing gay marriage go here.

Later this week I will post about my convictions on this matter. Oh…my lawyer asked me to direct your attention to my disclaimer.

In this post I will make an explicitly Christian case against allowing the state to recognize gay marriages and/or civil unions. Again, this is simply my attempt to think through the issue using my own presuppositions as a reformed evangelical Christian. I make no representation that this is the only, or even the best, way to think about the issue at hand.

There are several justifications a reformed evangelical Christian could point to in order to object to the state’s recognition of gay marriage–I have chosen to limit myself to three of them.

Procreation isn’t incidental to marriage, at least not in the traditional Christian understanding of the nature of marriage.

As I understand it, Christians may disagree about precisely how central procreation is to marriage, but almost all Christians agree that procreation is one of the essential purposes of the union of a man and a woman in Holy matrimony. Marriage, after all, is an English word derived from the Latin maritare (“to marry, to wed”), which is related to mater (mother) making explicit the connection between marrying and mothering.

As the 1662 Book of Common Prayer (Church of England) states:

“…the causes for which matrimony was ordained: First, It was ordained for the procreation of children, to be brought up in the fear and nurture of the Lord, and to the praise of his holy Name.”

Most Christians would also agree that a marriage is not illegitimate where procreation has not taken place (either for medical reasons or by choice or where the children present in the family are not biological children).

So while childbearing and childrearing are central to marriage (indeed marriage is the normative state or relationship in which both take place) it does not the provide the exclusive rationale for or meaning of marriage. It has to be noted that absent technological intervention it is impossible for two men or two women to conceive a child. It is impossible for a man to bear and deliver a child.

This biological reality suggests that a homosexual relationship is not suitable for recognition as a marriage (since it cannot accomplish a constituent part of what a marriage is for). As a result it is not a relationship that ought to be recognized as a marriage by the state. There is, after all, absolutely no chance that the relationship can fulfill the command of God to “go forth and multiply, fill the earth and subdue it”

Many Christians believe that far from being an arbitrary and culturally-conditioned restriction, the Scripture’s prohibition is actually reflecting the purpose for which humanity was created. Violating that purpose involves pursuing something as good that is in reality less than good and, as such, is harmful or detrimental to us. Homosexual relationships fall into this category of behavior. In a society conditioned to believe that autonomy or freedom constitute the “best good,” this sort of claim is fairly shocking. Traditionally, however freedom has referred to the ability to choose good rather than to simply choose between “A” and “B” according to one’s appetites or desires.

Since its inception, the Christian community has lived into the counsel of the prophet Jeremiah who in the Old Testament told the Covenant community that it should: “seek the welfare of the city where I have sent you into exile…” (29:7, ESV). Although commonly believed to have been a sort of first century anti-establishment, anti-empire community, there is Biblical evidence that the early church engaged into blessing the city in a variety of ways including wealthy Christian benefactors (such as Erastus the “city treasurer” (ESV) of Corinth mentioned in Romans 16:23.

The Christian community has always understood that it has a duty to seek the common good and that seeking the common good comes about by aligning the laws of a nation with the principles upon which the law of God rests. It is for this reason that early Christians also cared for the poor and helped widow and orphan (a repeated refrain in the New Testament). By so doing they were aligning their culture and using their influence to be a redemptive force in culture. Clearly the outworking of this principle has not always been perfect. There have been grievous errors and mistakes, but in the whole the Christian faith has contributed positively to the human race.

It’s worth noting that we (in the west) often hold Christianity to a higher standard and are more quickly willing to critique it than other world religions. Obviously Christianity is the “closest” religion culturally for many of us. That is to say, we have had the most exposure to it over time and therefore have had a greater chance to form arguments against its influence than we have with other religions. Additionally, many of us are frankly ignorant of the cultural influence of other world religions on their cultures. We should be aware of this fact and that awareness should make is reconsider before making flippant and superficial critiques of Christian influence in our society.

Over the last two hundred years there has been an evolution in our understanding of the nature and purpose of the law. Traditionally, law has been understood as giving expression to rights that exist in nature and are discernible by an appeal to reason. These natural rights cannot be rescinded or rejected by governments or regimes–they include (most famously) the rights to life, liberty and property (John Locke).

Further, we run into a definitional problem. The natural right of marriage refers only and exclusively to the union of a man and a woman. It has almost exclusively been recognized as such in western civilization. The natural law definition of marriage finds its first expression in Genesis with the marriage of Adam and Eve–a man and a woman brought together in order to be parents to the race of humanity.

Those in favor of limiting marriage to its traditional definition do so because they believe that calling a union of two people that cannot (in the absence of medical limitation) biologically produce children a marriage is the logical equivalent of calling a circle a square. It is impossible to consistently do it without causing greater and more essential problems.

At least in the case that I’ve outlined here, the Christian case against gay marriage rests heavily on associating the estate of marriage with childbirth and childrearing. As I mentioned in an earlier post, this association is now perhaps the weakest it has ever been (at least in the west).

These are my thoughts…what are yours?