Why I think Paul Ryan won the Vice Presidential Debate

Despite the fact that I said I wasn’t going to watch the Presidential debate several weeks ago, I decided to tune into the Vice Presidential debate last night. I have never heard Paul Ryan speak publicly and there’s only one debate for the veep candidates so I tuned in.

Based On what I’m hearing from friends who watched both, last night’s debate was significantly more lively than the first debate. I was pleased with how the debate was moderated–it seemed well managed and fair. I enjoyed the format, with its opportunity for interaction between the two candidates. All in all, it was a good debate.

In the end, I think Paul Ryan finished as the winner. It wasn’t the thumping that President Obama seems to have taken, but it was a loss. And I think it proved Ryan ready for the prime time despite protestations to the contrary from the left. 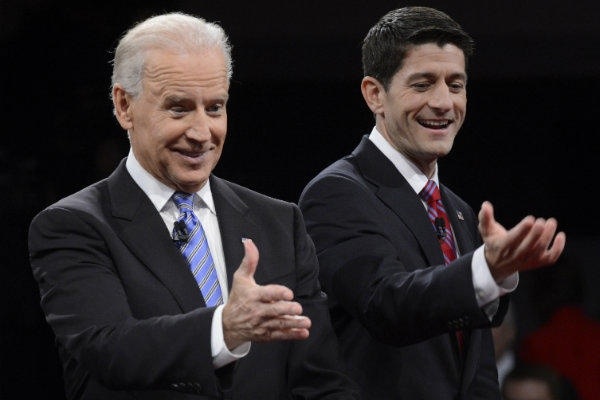 In my view, there are five reasons that Ryan won, albeit a slight victory:

1. He was more the more presidential. The side-by-side shots of the two candidates showed a Ryan who was composed, under control, and ready with an appropriate response to each of Biden’s talking points. Contrast this with Joe Biden who unnerved me with his gargoylesque grin and his gesticulations and muttering. Remember, I’m a Brit, I prefer understated. If I didn’t, I’d be Italian.

2. He was respectful to his opponent. Obviously as the younger and less experienced candidate Ryan had to walk a tough line between challenging Biden and showing respect for a sitting Vice President and senior statesman. I think he was able to do that. He challenged where necessary, but always in controlled tones and with some degree of evidence to back it up. As I mentioned above, I found that Biden’s performance was distracting. He interrupted too much and his general incredulity was sophmorific.

3. He stayed on message, despite repeated interruptions. Here Ryan did quite well. He put his case before viewers and he didn’t get sidetracked.

4. He parried Biden’s attacks. I think this was especially evident around the 47% talking point. I think that Ryan’s quip: “I think you know what it’s like for things to not come out right…” was genius. Biden rejoinder, “but I always say what I think, and so does Mitt Romney” was an excellent reply, but was lost in the moment’s laughter.

5. Biden failed to respond well to several of Ryan’s key charges. Biden was really weak in national security, especially at the beginning where I think that he was on the ropes about the security in Benghazi and the failed to quash Ryan’s contention that unrest is spreading through the mid-East and the Obama administration is, in his view, not adequately managing the situation.

Polls suggest that viewers of the debate favor Ryan as the winner although the mainstream media seems to be more equivocal. In the end, I’m not sure what difference this will make but Ryan performed significantly better than I expected.

What did you think?