This is the first post in a series about how congregations can become more missional in how they understand and carry out ministry in their community. Missional is popular. A lot people are using the word, but I’m not always sure how clear they are on its meaning.

A simple way to get a little bit better of a handle on this word is to substitute “missionary” for “missional.” I’m sure there were good reasons for choosing missional over missionary, probably related to some of the cultural baggage associated with missionary, but the two words are both derived from the root word “mission” and essentially mean the same thing.

At it’s heart being missional is about placing God’s mission at the center of the life of the individual and the center of the church’s existence, where it was surely meant to be all along. Let me unpack that a little. 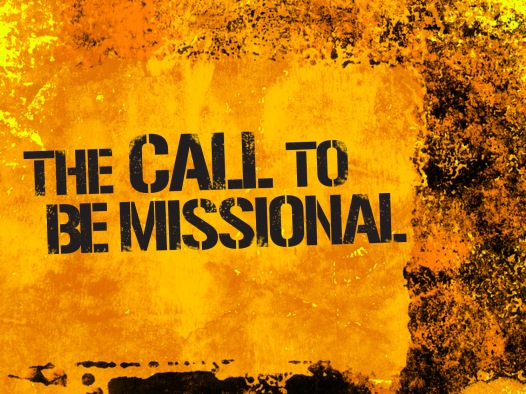 The central belief of those of us who affirm a missional/-ary theology is that it is the nature of God to act in the world and that His action is in furtherance of His purposes. Ultimately, God is the initiative-taker, and nothing happens absent His first acting.

The church has been brought into being by the action of God with a distinct charter and purpose. In like manner to the way in which God sent His Son into the world to redeem a people through his perfect life, atoning death, and overcame sin in His resurrection, the church is sent into the world with a message. Jesus says as much, “As the Father has sent me, even so I am sending you” (ESV).

That message is the gospel, the good news or glad tidings of Jesus’ victory over sin and death and this ushering in the kingdom of God. As Jesus ends His earthly ministry, He launches the church:

6Now the eleven disciples went to Galilee, to the mountain to which Jesus had directed them. 17And when they saw him they worshiped him, but some doubted. 18And Jesus came and said to them, “All authority in heaven and on earth has been given to me. 19Go therefore and make disciples of all nations, baptizing them in the name of the Father and of the Son and of the Holy Spirit, 20teaching them to observe all that I have commanded you. And behold, I am with you always, to the end of the age.” [Mt 28:16-20, ESV]

Encapsulated in a relatively few words are the entire mission of the church. We are out into the world to:

One of the central observation of missional theologians is that we have reached, as a culture, a tipping point–we have become a culture that no longer privileges Christianity. Clearly American culture is not monochromatic so the degree to which we are secular varies by region. Even in the south, I think, it is fair to say that Christianity is no longer privileged by the culture. It is no longer the assumed religion of everyone.

As the church is going, it is going into something new: a post-Christendom culture. This is a cross-cultural journey as so requires several things:

In my next post, I’ll explore the difference between “missional” and “attractional” as two distinct ways of understanding the ministry of the church and of the Christian. I’ll argue for something I call “hybrid church,” that is a blending of missional and attractional ways of doing church.

5 Replies to “[Missional Monday 1] What is missional?”