I recently wrote a post asking whether–and if so, how–the Presbyterian Church (USA) is evangelical. This generated some interesting conversations about what the word evangelical really means. In light of these conversations, I thought it worth exploring the variety of perspectives on the evangelical movement.

One of the most significant leaders of modern evangelicalism was Martyn Lloyd-Jones. Lloyd-Jones, a Welshman, served for many years as Pastor of Westminster Chapel in London. 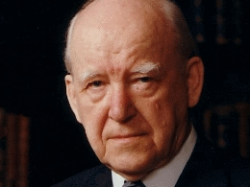 In 1971, Lloyd-Jones preached a series of messages at the Conference of the International Fellowship of Evangelical Students (IFES). He had, for many years, been involved with the British Inter-Varsity Fellowship, itself associated with IFES. Note: my employer, InterVarsity Christian Fellowship/USA, is the American arm of IFES.

During this time Lloyd-Jones had grown concerned with what he perceived as a watering down of the gospel message. He took the opportunity to address this when spoke.

Years later his messages were published by Banner of Truth as What is an Evangelical?

Lloyd-Jones argued that there are ten distinctives that provide definition to the notoriously fuzzy word, “evangelical.”

Here they are with my commentary added in italics. Note: Lloyd-Jones represents a conservative, separationist evangelicalism. On the other hand, John R W Stott (whom we’ll look at later) represented a more moderate evangelicalism that was able to survive and thrive in a mixed (broad) church.

Lloyd-Jones’s list is longer than mine would be. However, I think it is helpful to consider that his position is representative of many evangelicals today. This can be helpful in understanding why some evangelicals find leaving a denomination that appears to them to be corrupt, a no-brainer.

One response to “10 Evangelical Distinctives”