The relationship of religion, culture, and politics in the United States is tricky. Ours is a profoundly religious culture despite the ascendant theory of Constitutional interpretation that espouses a “strict” separation between church and state. Our public square has, to borrow a phrase from Richard John Neuhaus, been stripped of any reference to religion as an authoritative source of moral guidance—it’s naked.  Or so it seems.

In reality, our culture isn’t devoid of religion—its haunted. Philosopher James K. A. Smith addressed this topic in his 2013 James A. Gray Lectures at Duke Divinity School.  Our current cultural moment exhibits a mutual haunting of immanence by transcendence and transcendence by doubt. We’re Saint Thomases all—to the extent we believe, we do so in the midst of profound and lingering doubt. Given this, how is the church to rightly discharge its commission to faithfully proclaim the Word and administer the Sacraments? Can it even be done? 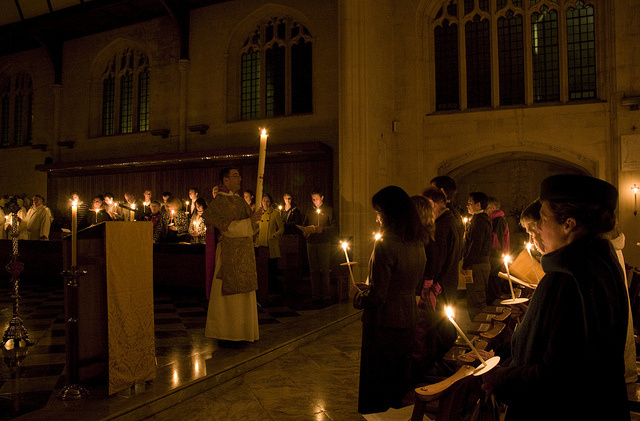 Faithful witness begins with the realization that secularism means that all beliefs are fundamentally contestable.[i] According to Smith, “belief is one option among many and not the easiest.” Every source of knowledge—each plausibility structure that provides the scaffolding to our belief—is susceptible to critique.

The result is a vision of life in which everything beyond the immanent has been eclipsed. At first glance this seems exclusively a burden on Christian witness. Our culture is no longer like a pinball machine with buffers and an incline that inevitably lead us to belief in God and a shared morality.

At the same time, the very contestability of knowledge applies to all knowledge, not exclusively religious knowledge. Despite our confidence in science, some are still aware that there are dimensions of reality of which science cannot meaningfully speak. This offers the church an opportunity to speak into the void the words of the gospel and, moreover, to make the gospel a lived experience.

In our new hyper-modern reality boredom, loneliness, and distraction replace rapture, friendship and longing. Over the last thirty years, for example, the number of Americans reporting feelings of loneliness has doubled despite all the advances of mobile technology that allows us to present to others across the globe albeit in a mediated form.

We are electronically connected, Smith noted, but life in a highly technological age centers on ex-carnation—the removal of experience to a plane other than the physical. Consider the number of hours a day you spend communicating with people who are not physically present to you. The phone. Facebook. Email. Twitter. All are ex-carnations of community. Public worship experienced via satellite image. The Eucharist experienced over Social Media. Phone sex. All are ex-carnational—they move us out of our physicality and into the realm of the disembodied self.

Ironically, in the midst of this loneliness epidemic, more people—especially teenagers–report the feeling of being always available, watched, monitored. And not just by the National Security Agency. Social media is creating in people a sense that their life has to be exceptional, that they must chronicle and broadcast these experiences to others in order to validate their existence in the eyes of others. Moreover, social media users are also increasingly aware of what they’re missing out on—the games night you weren’t invited to, the employee-appreciation lunch at a large firm you didn’t get, the Caribbean vacation captured on Facebook that you couldn’t afford, you name it. As others sculpt their lives and publish them virtually toward the end—conscious or unconscious—of creating a branded self, we compare and measure ourselves against our competitors in the marketplace of life. As a result our lives are becoming increasingly superficial.

In the context of this dilemma the church has the chance, according to Smith, to engage in tcounter-cultural proclamation that God in Christ is reconciling the world to himself. The antidote to our modern dis-ease is the renewal of the church’s ancient liturgical practices, which are necessarily incarnational. The church must offer an intentional liturgical response that invites moderns to experience God as the only one who sees them as they are and loves them completely.

Yet, much of the church is as enamored of the very conditions creating our present malaise as the rest of the culture. Too many of us believe that if we create a worship service that is a polished, technological marvel then eventually we will generate enough hype to become “the sort of church that un-churched people want to come to” as Andy Stanley describes his congregation. And so we anchor the gospel to modernity and we lose sight of the fact that in worship heaven and earth meet.

To recapture the mystery of worship Smith points us to pre-modern sources. These sources can reawaken our imaginations—a faculty often neglected in the age of special affects and low literacy. Young adults don’t want to be entertained in order to stay in church. In fact, my own experience is that young adults don’t trust entertainment. They realize that entertainment is really a platform for selling. Rather than entertainment, these they are yearning for a tangible, tactile, liturgical, rooted community.

What they’re getting instead is very often entertainment. In evangelicalism and mainline Christianity we see two approaches the same issue. The former tends to place unhealthy emphasis on increasing the production quality of worship ironically delegitimizing many of the very questions being asked by millenials about the broader culture. The mainline church often panders to what they believe enlightened youth would want.  Changing social attitudes define doctrine because, like evangelicals, it’s a marketing scheme.

What is required now is something deeper than accommodation or improved performance. The church needs to recover its theological vision. That theological vision is the foundation on which its ministry and witness will be built. That vision ought to be connected directly to the witness of Scripture, the Creedal and liturgical heritage of the church. As Richard Lints puts it, “The modern theological vision must seek to bring the entire counsel of God into the world of its time in order that its time might be transformed.[ii] That vision is the work of “translating” God and his Kingdom for a generation who speak a different dialect. Secular young adults may reject the gospel. It is to our shame, however, if they reject simply because they never encountered it expressed in accessible terms and in a life of authentic discipleship.

3 thoughts on “Church in the Christ-Haunted Secular Age”