Click above to listen to Ralph Vaughan Williams’ The Solent, Impression for Orchestra (1903). The piece is a musical reflection on The Solent, the body of water that stretches between mainland Britain and the Isle of Wight (see map below). 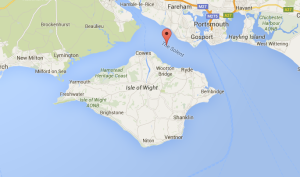 If it’s possible to feel a fondness for a body of water; I feel one for the Solent. As a child, I would spend hours on the shore watching the yatchs with their billowing, colorful sails. Merchant ships would steam through the channel headed for Southampton. Ferries to the continent would depart and arrive with regularity in Portsmouth.

Periodically, naval vessels would return to Portsmouth Harbor, the home of the Royal Navy since at least the time of Henry VIII.

At times a fog would descend in the evenings, windows open, I’d hear the gentle roll of fog horns as ships crept through the shrouded night toward their destination. Other times, squalls would pick up and drive waves in to the beaches and up to the roads, lashing the stones and tumbling them back and forth along the ground.

It was a magical place to grow up, especially because of Lord Palmerston’s follies, a chain of Victoria forts built to defend the United Kingdom from invasion by a continental foe.

There were forts on the shore and in the channel itself. They seemed like mystical, inaccessible places when I was a boy.

As I listen to Vaughan Williams’ composition, it brings a wave of nostalgia over me. The power of music!